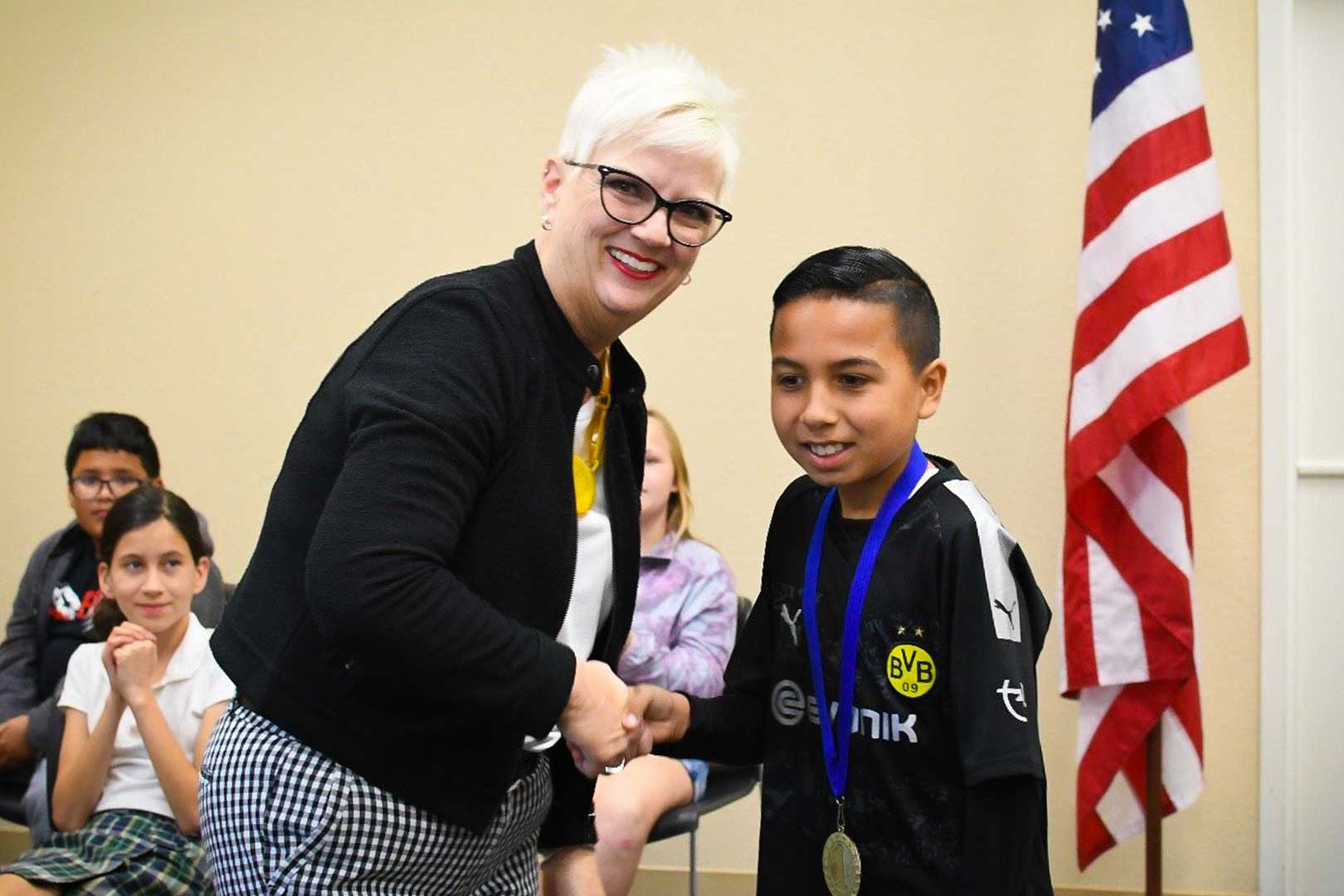 The Agribee™ is a define and spell bee, using agriculture related words, for fifth grade students.

The International Agri-Center® is proud to host the Tulare County Agribee. Schools participating in the Agribee host a school-wide Agribee to identify two finalists in which they then compete with the other 5th grade finalists at the regional contest held at the International Agri-Center® in Spring. Butte County Farm Bureau began hosting the Agribee for Northern California in 2005 and have been a wonderful supporter of the Tulare County Agribee as we began ours in 2019.

How can you help?

Be a sponsor! Contact agventures@farmshow.org for more information or call 559.688.1030.

Complete the application form below. If you have any questions please contact Brittany Howton at 559.688.1030 or email brittany@farmshow.org

The procedure is much like the standard spelling bee, with one major difference. Each word must be defined and spelled. Each participating classroom will hold a classroom Agribee™ to identify the two highest scoring students.

GENERAL RULES FOR THE AGRIBEE™

Classroom, school level, and County Level Agribees™ as needed, will be held to identify two winners from each participating school, using the Word Lists and Definitions provided. Two winners from each participating school will be eligible to participate in the Agribee hosted by the International Agri-Center® on Thursday, March 5, 2020 at the International Agri-Center® in Tulare, California.

Standard spelling bee rules apply to the spelling of words in the Agribee. The one unique difference is that the participant must also provide the agricultural definition of the word.

Once the speller has started, the order of letters spoken may not be changed although the speller may start over the letters they have already said need to stay in that order.  Any altering of the order previously given will disqualify the speller.

The speller may ask the Word Caller to say the word and/or sentence again.

The definition given by the speller does not have to be the same wording as that provided with the distributed words/definitions lists.  The Judges will be called upon as needed to make a decision to accept or reject a speller’s definition.

Local Agribee contests should follow the same rules and procedures used at the final contest.

To assure impartiality, we have randomly selected the order of participation, and the order in which words will be given has been pre-determined for the Word Caller.

The students will have an opportunity to introduce themselves to feel comfortable with speaking in front of people at the podium.

~The word caller will say the word, uses it in a sentence, and repeats the word.

Round Two and all subsequent rounds:

At the end of Round One, after each student has had one opportunity to spell and/or define a word, the pattern changes. The remaining students in the Agribee must spell and define each word given. If unable to do both, they are eliminated.

Final round is between the last two contestants. If one student misses a spelling or a definition, the other remaining student will receive a new word to spell and define. If spelled and defined correctly that student will then spell and define the next given word. That word must be spelled and defined correctly to win the Agribee. If he/she is unable to do so, the other contestant returns to the contest, and this procedure continues until a winner is determined.

In the event that both of the final two contestants are able to correctly spell and define all of the words, the Word Caller will move to a list of words which were not distributed to the contestants prior to the Final Agribee. Using this list, and the procedure described above, the Agribee will continue until a winner is determined.